Are Tattoos Okay at Work?

Are Tattoos Okay at Work? 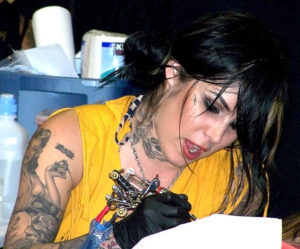 As the workplace evolves, so do the rules, or so you may think. While a large amount of Americans (over 45 million) have a tattoo, is the workplace more accepting of tattoos than they used to be?

Based off recent reports and surveys, the answer is no. Even though doctors, lawyers and business people like us have tattoos, that doesn’t mean they still accept them visibly in the workplace.

A 2010 Pew Research Center report says tattoos are equally common for women and men, with nearly 40% of 18-29 year olds and about a third of 30-to 45 year olds sporting at least one. The report also says most of the inked community (over 70%) keeps tattoos hidden at work or during interviews, perhaps with good reason. A survey conducted by CareerBuilder suggests that obvious ink can hurt promotion prospects.

As previously mentioned, there is no research suggesting companies are looking to hire tattooed employees. But they do have to adapt to the evolving culture to keep talent. Most of the time though, workers are the ones who do the adapting and it looks like things aren’t changing anytime soon.

So always keep this in mind when starting a new job or trying to maintain the job you have. Cover your tattoos. Whatever you might think, the law does NOT protect your ink. The U.S. Equal Employment Opportunity Commission covers discrimination in the workplace and fails to mention discrimination of tattoos. So if you aren’t sure if its okay to keep your tattoos visible at your company, play it safe and keep them covered.

Grow Your Career Strategically, and Improve your Career Trajectory.

This website uses cookies to improve your experience while you navigate through the website. Out of these cookies, the cookies that are categorized as necessary are stored on your browser as they are essential for the working of basic functionalities of the website. We also use third-party cookies that help us analyze and understand how you use this website. These cookies will be stored in your browser only with your consent. You also have the option to opt-out of these cookies. But opting out of some of these cookies may have an effect on your browsing experience.
Necessary Always Enabled
Necessary cookies are absolutely essential for the website to function properly. This category only includes cookies that ensures basic functionalities and security features of the website. These cookies do not store any personal information.
Non-necessary
Any cookies that may not be particularly necessary for the website to function and is used specifically to collect user personal data via analytics, ads, other embedded contents are termed as non-necessary cookies. It is mandatory to procure user consent prior to running these cookies on your website.
SAVE & ACCEPT
Go to Top